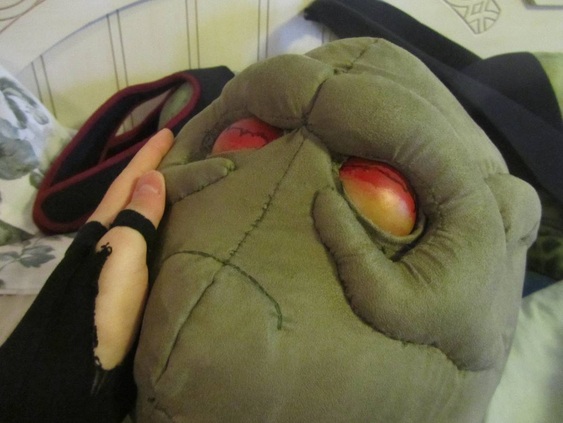 Without a doubt, my most ambitious project to date! This began as little more than an inside joke between my best friend and I, back in the summer of 2010. I mentioned making a life-sized Lott Dod, and even drew up some plans and made some calculations on dimensions, materials, etc. But I shelved it as unfeasible and probably over-the-top. It was last year that I began to take more and more of an interest in the project (probably as a means of coping...or a result of my brief loss of equilibrium). I decided that when I returned to Colorado for Spring Holiday, I would make it a reality. I spent a considerable amount of time leading up to that planning materials and sizes, and drawing up improved designs. I even remember looking at one of my lecturers and thinking "hmm...I wonder how many bags of stuffing it would take to fill his arm..."

I began building him in April; I was actually hoping to have him done by the time I had to return for exams, but a combination of laziness and confusion over certain aspects of the project pushed the ETA further and further back. As of now, he is still a work in progress; the body is completely assembled, but he has nothing more than a rainbow loincloth to wear.

He has a complete, but basic, wire skeleton, complete with a ribcage and pelvis, and a styrofoam head for support. The skin is a super soft faux suede which actually feels like real skin, when it's warmed. The eyes are a halved and painted squash ball, coated in PVA glue for sheen and protection; they also have a bit of material wrapped around them (which I shall paint purple) for the eyelids, and are actually embedded in the head. The hat was made from copious amounts of cardboard and duct tape...I actually lost three needles while sewing on the material. Without the hat on, he's 6'3" tall (Lott Dod's exact height), so he is, literally, bigger than a human...and he gives amazing hugs!

When he's done, he will be Lott Dod. I have plans to make Nute and Rune as well.
Powered by