My Neimoidian and Duros Collection

I got my first Star Wars figure when I was just four years old; it was a POTF2 C-3PO with a Belgian orange cardback (boy I wish I'd saved that packaging...); from that day on, I loved Star Wars offerings.Throughout my childhood, there were always a few figures or other pieces in my toybox; however, it wasn't until I moved to Colorado in 2005, and had proper access to Star Wars merchandise in stores, that I began to collect and display seriously. It was while still living in Israel, however, that I got my first Neimoidian ever. My mother had come back from the USA for my middle school graduation, and brought me a ROTS Neimoidian Warrior (along with a Mas Amedda and a large bag of Star Wars M&Ms). Having lived off of Rebelscum.com for six months, to actually HOLD a Star Wars figure, a Neimoidian one at that, was almost overwhelming,

Five years later, with my Star Wars collection packed away until after university, I decided, while living in Estonia, that I wanted to collect every piece of Neimoidian- and Duros-related merchandise, and begin a sub-collection. I knew...or at least I thought I knew, it would small enough to display and transport to wherever I would end up making my home while at university, and every piece would be beautiful and special.

I'll admit...even I was surprised at the amount of Neimoidian items available! I never imagined it would grow to its current size; it's actually spread out across two countries (for reasons you'll shortly discover) at the moment! I'd wager it's the largest collection of its kind; please enjoy! 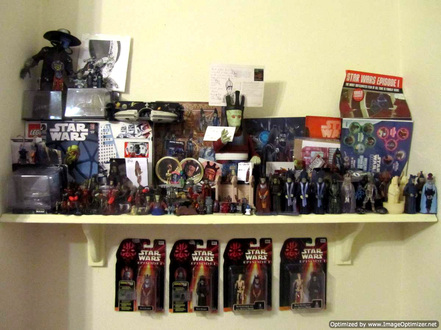 An overview of my first shelf of Neimoidians/Duros (yes, there are multiple). I'll go into further detail of some of the items, lower down. Click to enlarge each image. 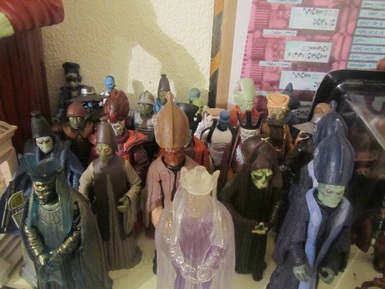 I have every Neimoidian and Duros figure ever released, plus some prototypes, some unreleased figures, and some Kweh-made customs. The acetate screen you can just see behind them is actually an Episode I prop; these were printed on the screens of the pods during the Senate scene. Lott Dod even has his hand resting on one 8D

Yes, those are two, TWO, holographic Nute Gunray figures, and they are the crown jewels of my collection! When I was thirteen, I wanted a holo Nute so badly, but knew there was no way I would ever be able to get one. I found the clear one online in early 2011, and, thanks to my ever-understanding family giving me a loan, was able to buy it. I remember the day it arrived, I was carrying the box across campus thinking "if these other students knew what was in here was worth about £300, they'd mug and kill me." As much as I loved that figure and was grateful to finally have one, though, it wasn't the holo Nute I had in mind. The blue one was an acquisition from earlier this year (2012). It is, in all respects, the perfect, most ideal holo Nute imaginable. This is the figure I wanted for so many years! Please don't rob me...

I'd love to have at least one prototype of every Neimoidian/Duros figure, one day. My Lott Dods are in various stages of completion, but I LOVE the white-robed one. Wish I could find a hat for him!

The CommTalk figures were, essentially, the exact same CommTech figures released in certain parts of Europe, under a different name. This was due to a licensing and copyright issue with a German telephone company of the same name. While only the packaging differs, they are an interesting and somewhat hard-to-find variation. I was very lucky to find a lot of four CommTalk figures, plus the reader, which included both Nute and Rune, for an excellent price,

The line seems to have more or less ended, so I haven't got much hope that we'll ever see Rune Haako, or any other Neimoidians.

(the purple Nute Gunray card I actually found on the floor of the London Underground - a little scuffed, but I'm not bothered!)

The first five cards are one-of-a-kind sketch cards from Portratz and Hai, whom I absolutely adore. Their works of art are just stunning! The two at the end are by another artist, and possibly the most beautiful sketch cards I have ever come across. I was up at early hours to win these, and they were totally worth it. Pictures do not do them justice.
This Lott Dod is an original (THE original) Joe Corroney sketch, and is featured in a Holonet News article here. Now, Mr. Corroney's art goes back a ways for me, and I honestly never thought I'd own a piece, let alone a Neimoidian piece. I went through hell on eBay to get him, but totally worth it! He is, without a doubt, one of my favourite pieces in my entire collection! 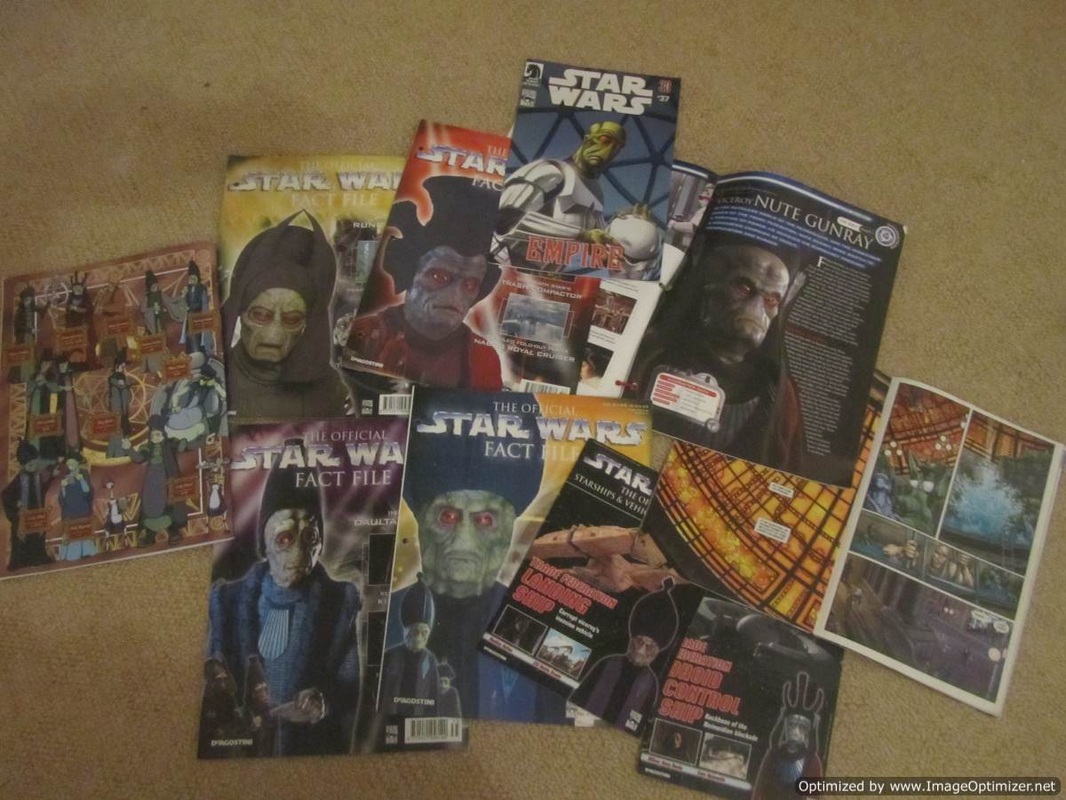 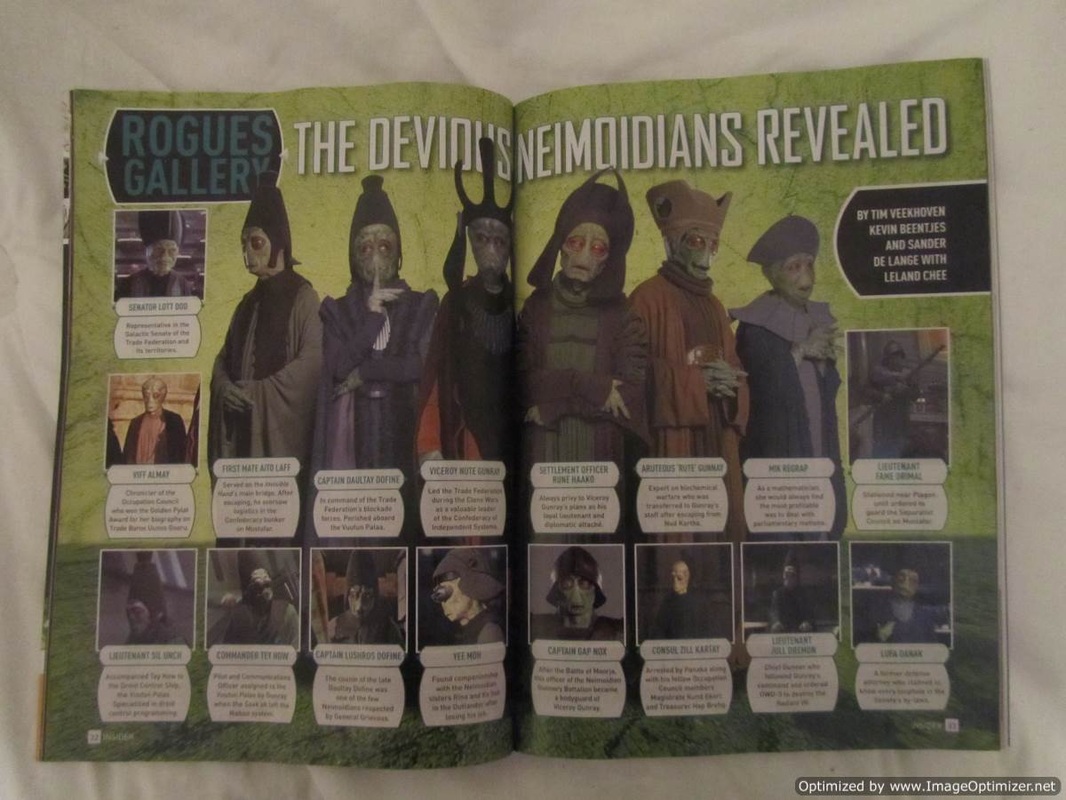